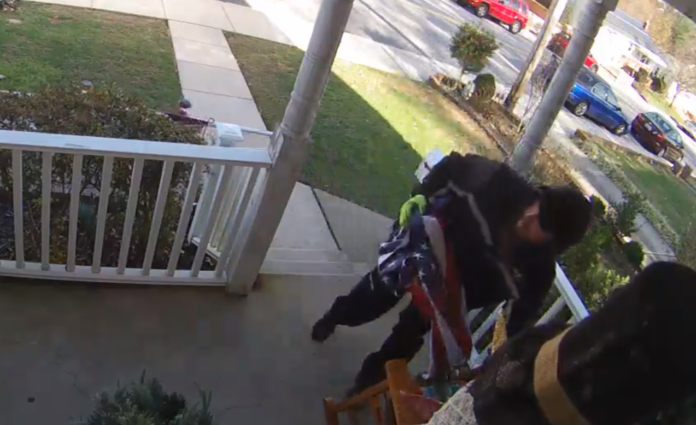 Recently, a FedEx driver pulled his truck in front of a Maryland home to pick up and fold an American flag. He spotted the flag pole that had tipped over that windy day, and instead of continuing his route – he stopped to help. This token of respect was captured on Gail Cook’s Nest home security camera. When she viewed the footage and saw this act of kindness performed by the man, she now knows as Mike King, she decided to share the video on Facebook.

Gail said, “Today our flag pole broke with the high winds. The FedEx driver saw this when he was driving by and stopped. He not only picked up the flag but folded it properly and put it away safely on our porch. Thanks FedEx!! I hope he gets the recognition he deserves, I can’t thank him enough!”

As you can see in the video below, King pulls up to the house empty handed. He wasn’t delivering a package to Cook’s house that day. He stopped because he noticed that the symbol of our freedom lay in the dirt. In a comment on the post, King replied, “I couldn’t just drive by and do nothing”. He called it, “The Marine Way”.

King is a Marine Corps Veteran who went beyond the call of duty. He knew just how to respond and how to properly treat an American flag. He attempts to fold the flag on Cook’s porch. Realizing the winds are too strong, King takes the flag to his truck. There, he continues to fold the flag giving it the honor of the thirteen folds. In a statement, FedEx spokeswoman Shannon Davis said, “We commend the patriotic actions of Mike King, a service provider employee who went above and beyond to properly care for a fallen American flag while on his route.”

To see this Marine Corps Veteran give his respect to our country’s flag, watch the video below: