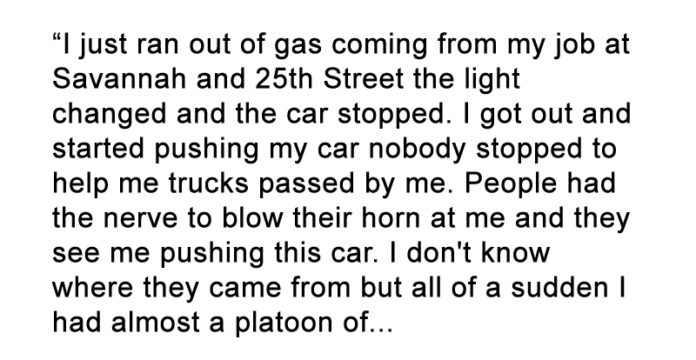 A woman from Port Arthur, Texas, recently posted a Facebook update that has gone viral. It it, she explains that she ran out of gas on the way home from work, and was stranded on a busy road as trucks and cars passed her by.

She says many vehicles honked at her as she attempted to push her car down the road. Then everything turned around for her a group of soldiers and a kindhearted stranger saw her struggle. Read her post below.

I just ran out of gas coming from my job at Savannah and 25th Street the light changed and the car stopped. I got out and started pushing my car nobody stopped to help me trucks passed by me. People had the nerve to blow their horn at me and they see me pushing this car. I don’t know where they came from but all of a sudden I had almost a platoon of army men they pushed my car literally from motiva Terminal Gate to the Citco station on Gulfway Drive.

Do you understand what I’m saying they pushed my car on their feet. When we got there I asked him can I please take your picture to let people know there are still young men in the world that will stop and offer their assistance to a woman in need. They said yes. At the gas station this man jumped out of his truck pulled $100 bill out of his wallet and offered it to them for them to go get themselves a meal.

They all said at the same time no sir we cannot accept that we were doing what we were raised to do. This same gentleman turned around and put gasoline in my car and told me keep the money that I had in my pocket. Man, when you are or child of God no matter what obstacles are placed in your way the Lord always has a ram in the bush. I thank each and everyone of you from the bottom of my heart……..

Her post was shared by more than 10,000 people who were touched by the kind act.

Want to see more of this in your newsfeed? Make sure to share and subscribe using the buttons below.