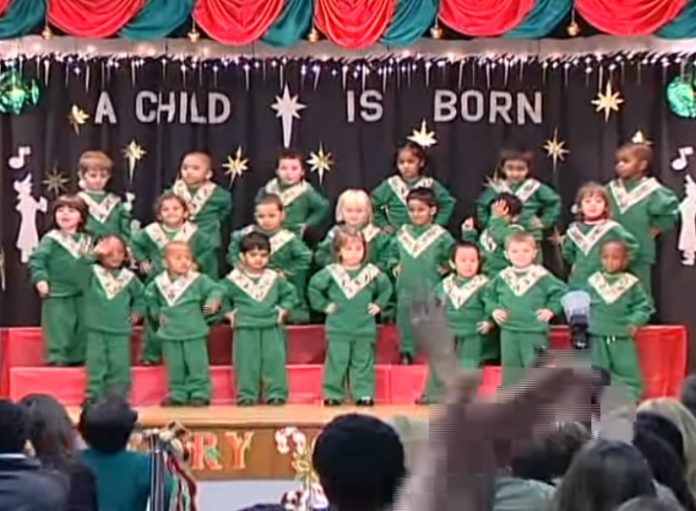 The preschoolers at Saint Elizabeth’s Child Care had been working hard all year long on their special Christmas performance. When they take the stage, it’s easy to imagine the nervousness the children must have been feeling. Stepping in front of all the adults in the crowd, strangers waiting and watching eagerly. The children excitedly wave to their family members in the crowd and as soon as the music starts – the fun begins.

The preschoolers bounce joyfully up and down to the beat of “Rockin’ Around the Christmas Tree”. With their sweet elf-like charm, their Christmas spirits light up the room for a timeless performance! The origin of the song “Rockin’ Around the Christmas Tree” is really a rather entertaining story. The song was originally written in 1958 by a man named Johnny Marks. This is the same man who wrote several other Christmas classics such as “Rudolph the Red Nosed Reindeer”, “Holly Jolly Christmas”, and “Run Run Rudolph”. The singer on the album for Rockin’ Around the Christmas Tree is a woman named Brenda Lee. And remarkably so, she was only 13 years old at the time she sang the song.

The preschoolers’ rockin’ around is clearly contagious because everyone in the crowd is also swaying from side to side. To experience these tiny tot’s classic rendition, watch the video below. It’s no doubt that you will get a sentimental feeling when you hear their voices singing – and see them dancing.